I’d first like to start out by saying how terrible I feel for you and all your friends that on a daily basis have to endure mean words written by people you don’t know. I can only imagine the difficulty of waking up in a 12,000 square foot Hollywood home and having your assistant retrieve your iPhone, only to see that the battery is low and someone on twitter (the social media concept that you and all of your friends contribute to on an hourly basis to feed your ego and narcissistic ways), has written a mean word or 2 about you. You’ve hit the nail on the head, war is exactly like that. You should receive a medal for the burden you have carried on your shoulders due to these meanies on social media.You said, “Its almost like, how in war, you go through this bloody dehumanizing thing and then something is defined out of it.” I could see how you, and others like you in “the biz”, could be so insecure and mentally weak that you could pair the difficulty of your life on twitter to my brothers who have had their limbs ripped off and seen their friends shot, blown up, burned and disfigured, or wake up every morning in pain – while just starting the day is a challenge. How about our wives? The ones that sign on to be there for us through thick and thin, that help us to shake the hardships of war upon our return? And do all this while being mothers to our kids, keeping bills in order because we are always gone, and keeping our lives glued together. They do all this, by the way, without a team of accountants, nanny’s, personal assistants, and life coaches. Yeah, reading a mean tweet is just like all that.

You know what is really “dehumanizing”, Miss Paltrow? The fact that you’d even consider that your life as an “A-list” celebrity reading internet comments could even compare to war and what is endured on the battlefield. You and the other “A-listers” that think like you are laughable. You all have actually convinced yourselves that you in some way face difficulty on a regular basis. Let me be the first to burst your bubble: a long line at Starbucks, your driver being 3 minutes late, a scuff mark on your $1200 shoes and a mean tweet do not constitute difficulty in the eyes of a soldier.

Understand me when I say this: war does not define me. It is a chapter in my life that helped shaped me. Being a husband and father is what defines me. Remember, sticks and stones may break my bones but words will never…be close to what war is.

The Telltale Signs of a Gun Control Sheep in Wolf's Clothing

- They claim to support the 2nd Amendment, but call for regulation and restriction of "high powered rifles", "high capacity magazines",  and "assault rifles".....yet are unable and unwilling to provide a definition of any of the above.

- They claim to support the 2nd Amendment, yet blame every criminal shooting on the NRA [and pretend that just as many incidents of defensive firearm use don't occur].

- They claim to support the 2nd Amendment, yet posit that the Founders "couldn't have envisioned modern firearms" [willfully oblivious to the fact that the Founders themselves lived in a time of great technological achievement, to include firearms].

- They claim to support the 2nd Amendment, and call for the need to "compromise", yet for them, compromise can only come from the gun rights position.

Be wary of these charlatans masquerading as allies of liberty. They are quite the opposite. Lenin had a name for them.......
Posted by Constitutional Insurgent at 8:28 PM 4 comments 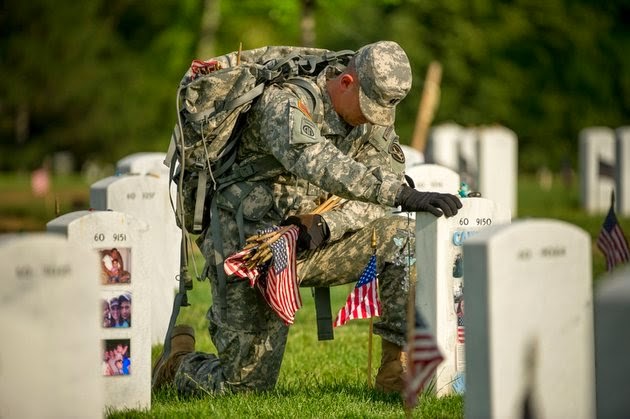 Remember the fallen.....and remember those they left behind.

If I hear anybody say "Happy Memorial Day" this weekend.......

I'm going to throat punch them.

That is all.
Posted by Constitutional Insurgent at 5:03 PM 4 comments

So why exactly does the US Department of Agriculture need a force kitted out like your friendly neighborhood SWAT team? IS livestock shooting back now?

h/t Of Arms and the Law
Posted by Constitutional Insurgent at 2:29 PM 6 comments

And the perpetual outrage machine goes rolling along.....

So ESPN cameras were on hand to capture Michael Sam's reaction to hearing that he was drafted...not remotely uncommon. The cameras caught him giving his significant other a celebratory kiss....also not remotely uncommon. The left wing media played this kiss up, to their discredit. The right wing media gives the non-story more legs by covering the kiss with the expected feigned outrage, to their discredit.

Kushnir, who stated “When parents do not have a choice as to whether or not they want their children to see this, it’s wrong.....It’s being pushed in faces" had no such qualms when she appeared admittedly giddy with Chippendale dancers on her morning show.

Yes, cry me a river over your selected outrage.

I'm perplexed by allegations of this 'persecution of the majority'......usually in response to statements by a minority who have themselves been historically persecuted by this majority. This simply illustrates that there are many who are not content to merely live their lives in accordance with their faith and values....they must compel others [often by the power of the State] to live their lives in accordance with the beliefs and values of the religious majority. This same majority will however, preach ad nausea as to how much they support liberty and freedom.

What they conveniently forget, is that religious freedom is protected insofar as your right to practice it without burden from the State or fellow citizen. You do not have the right however, to use the power of the State to enforce your belief system upon your fellow citizen.

Perhaps there's hope for the future after all....

Thoughts on the abducted Nigerian girls

Borrowed of course, but well stated.

I didn't hit Koko Head Crater last time I was deployed to PACOM, and since I'm working back up to tackling Mt Olympus, Lanipo and Olomana...this was a short trek. But it was up. I mean UP. They call it nature's stair master......and for good reason. 30 minutes up and 20 down [mostly due to people in my way]. So, compared to others times I've seen...not too shabby. I did manage to jog down the last 1/3, once I got around the people crabbing their way down. By that time, my knees needed extended motion.

But not this one. An appropriate post given my current duty location.

The ceremony was unusual in that it did not include the full division formation on Weyand Field. That was because about a third of the division’s Stryker and aviation brigades were involved in mission training, and other units were in the Philippines and New Zealand for exercises, Fuller said. Another battalion was out training at Schofield’s Jungle Operations Course.

The Hawaiian warriors dance that opened the ceremony was “a way to show our admiration and respect for the Hawaiian and Pacific islands culture,” Fuller said. The 25th was activated in Hawaii just months before the Pearl Harbor attack in December 1941.

Posted by Constitutional Insurgent at 10:22 AM 2 comments

Jedi's, Padawan's and Younglings...this is your day!

It was a sad parting when Sgt. Jason Bos left Fort Lee in Virginia nearly two years ago and had to say goodbye to MWD Cila M389, the bomb-sniffing chocolate Lab he called Cici.

Over nearly five years, Bos and Cila — MWD stands for Military Working Dog, and M389 is the identification number tattooed in her ear — had forged a bond as they searched for roadside bombs and hidden weapons caches in Iraq, and screened sites for presidential visits across the U.S. Their partnership ended when a back injury forced Bos to leave the Army in 2012.

Cila was just 5 years old, and still had time to serve as a military dog. While Bos headed home to Michigan, Cila remained on active duty.

Bos, 33, did not know if he’d ever reunite with Cila. But a month ago, he saw on Facebook that Cila was due to be retired. He was thrilled when the kennel master at his former base contacted him to see if he wanted to adopt her.

The spry 67-year-old tested his fitness on familiar paths as he welcomed 16 wounded veterans to his Prairie Chapel Ranch for the fourth annual Warrior 100K, a three-day bike ride to honor service members injured in Afghanistan and Iraq.

Bush called the event a “joyous occasion,” a way he can honor the veterans’ courage and sacrifice. He added that it’s hard to complain about one’s own maladies after seeing a veteran riding with a prosthesis, “hanging in there the whole time.”

Not quite the objectivity I'm looking for in a Chief Justice

Speaking at the Pastor for Life Luncheon, which was sponsored by Pro-Life Mississippi, Chief Justice Roy Moore of the Alabama Supreme Court declared that the First Amendment only applies to Christians because “Buddha didn’t create us, Mohammed didn’t create us, it was the God of the Holy Scriptures” who created us.

“They didn’t bring the Koran over on the pilgrim ship,” he continued. “Let’s get real, let’s go back and learn our history. Let’s stop playing games.

Amidst the tornados that struck the southwest last week, three incredible stories of selfless service, sacrifice and courage...though I'm sure there are many more I haven't seen.

A story of heroism is emerging out of the deadly tornadoes that struck the Little Rock, Arkansas area Sunday. Christian Gunter, 19, made sure 10 disabled veterans made it to safety as the storm barreled through a long-term care facility in Vilonia.

Gunter, who manages the home for mentally and physically disabled ex-soldiers, discussed his actions this afternoon with Gretchen Carlson. He explained that he was already there when the tornado came through.

Gunter made sure he got all the vets loaded into a vehicle and transported to a church about a mile away that serves as a storm shelter. The home sustained major damage as parts of the roof were torn off.

"It's always our priority to take the best care of them that we can possibly do. Our guys have risked a lot and it's a great opportunity for us to help them out," he said.
Gunter's home was destroyed by the twister.

John Servati saved the life of his girlfriend during his final hours on Earth, but he "was a hero every day," according to one of his friends.

According to WSFA, 21-year-old Servati died in the basement of a Tuscaloosa, Ala., home Monday night, as severe weather ripped through the South. He and his girlfriend had been seeking shelter from a tornado when a wall, which had been weakened by heavy rain, collapsed on Servati. The swimmer was pronounced dead at an Alabama hospital shortly after.

Anna Rae Gwarjanski, a fellow University of Alabama swimmer who said on Twitter she's been in contact with Servati's family, tweeted that the swimming star died while saving his girlfriend's life.

And the one that hits me the hardest....

Master Sgt. Dan “Bud” Wassom II’s last action in this life was using his body to shield his 5-year-old daughter Lorelai as a tornado demolished his house on Sunday, said his mother, Pamela Wassom.

At the hospital, Lorelai told anyone who would listen that her father had saved her life, Pamela said.

His wife Suzanne is also a hero, said her sister, Teresa Cole. Suzanne shielded their 7-year-old daughter, Sydney, when the tornado tore through Vilonia, Ark., north of Little Rock. Afterward, she moved both daughters to safety and helped a little boy who lived across the street.