No, Ted...you're a tool and I hate your music

The payoff came as Nugent’s earlier comments and song lyrics became a political issue during a campaign swing with Texas GOP gubernatorial candidate Greg Abbott. But city officials have said the move was more about the propriety of Nugent’s show for a family oriented Independence day festival than that controversy.

Nugent said he was appalled by the move, which he called pure politics.

“Those that hate me are following the Saul Alinsky playbook on how to dismantle, fundamentally transform the greatest nation and quality of life the world has ever known,” he said. “Those that hate me hate America, plain and simple.”

Nugent did not respond Tuesday to questions about published comments he made last week that Longview Mayor Jay Dean is racist and dishonest.

“I hear from reliable sources that the mayor is a racist and was offended that my band performs mostly African-American-influenced music,” Nugent was quoted as saying in a column that appeared Saturday in the Fort Worth Star-Telegram. “Everyone knows ol’ Uncle Ted is the ultimate Independence Day rockout with the ultimate all-American, soul music, rockin’ soundtrack of defiance, liberty and freedom. We shall carry on. We are the good guys. Clueless, dishonest people like the mayor are the bad guys.”

Ted...Ted...you ignorant twit. You don't love America, you love a bumper sticker cartoon of what you think America is about.

If this nation were really about draft-dodging, friend-of-the-military poseur, blowhard guitar hacks....we wouldn't have made it this far. Your ilk is entertaining in a Honey-Boo-Boo sort of way, but those of us who support the 2nd Amendement and individual liberty on their merits...rather than picasso-ish caricatures of such...really wish you would limit your public efforts to whatever self-aggrandizing agitprop Sarah Palin has going on these days....and stop associating yourself with Conservatism.
Posted by Constitutional Insurgent at 1:05 PM 3 comments 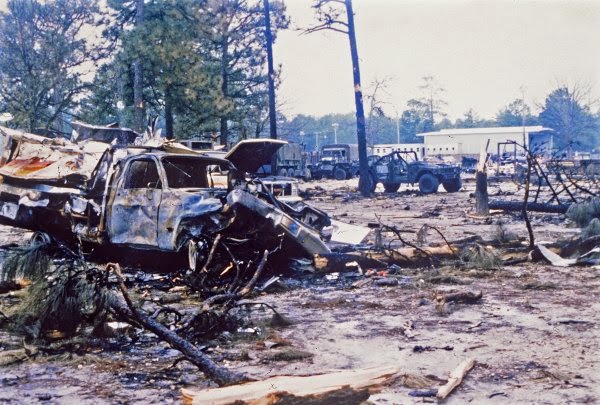 Yesterday marked the 20 year anniversary of the crash at Pope AFB's Green Ramp, that took 24 Paratroopers from our ranks.

The 82nd Airborne Division on Monday will commemorate the 20th anniversary of the deadly Green Ramp accident that killed 24 paratroopers.

The ceremony will take place at 11 a.m. at PAX shed 2 on Pope Army Airfield, N.C., according to information released by the 82nd Airborne.

Green Ramp is a staging area used by the Army and Air Force to prepare for and conduct joint operations.

On the afternoon of March 23, 1994, an F-16D Falcon collided with a C-130 Hercules transport plane while both were trying to land at Pope Air Force Base. The C-130 landed safely, according to an Army account.

The F-16 pilots ejected as the fighter plummeted to the ground, ricocheting across the tarmac and sliding into one of two parked C-141 Starlifters, according to the 82nd Airborne.

Both planes exploded in flames, hurling searing-hot metal through the air and spewing 55,000 gallons of fuel onto Green Ramp. The fireball swept across the staging area where paratroopers were preparing for airborne operations. The flames killed 24 soldiers and injured more than 80 others.

It was the largest loss of life for the 82nd Airborne Division in peacetime since World War II, according to information from the division.

“Twenty years ago today, disaster struck the Fort Bragg community," Maj. Gen. John Nicholson, commander of the 82nd Airborne Division, said in a statement. "As a community, we grieved for those who were killed and wounded during the tragic accident at Green Ramp. Now, as a community, we are remembering and honoring the paratroopers who lost their lives and those who suffered severe injuries on that day."

It's hard to believe that it's been 20 years since my company was at the Bragg MOUT Site....when we heard an explosion, and looked over the treeline to see the smoke plume.

Quote of The Day

“Arguing with liberals…it’s like playing chess with a pigeon; no matter how good I am at chess, the pigeon is just going to knock over the pieces, crap on the board and strut around like it’s victorious.” — Anonymous

From Alphecca, referring to the Gun Control Cabal
Posted by Constitutional Insurgent at 7:24 AM 3 comments

A result in search of a problem

In yet another poorly executed 'study', the State tells us that our schools are racist.


Public school students of color get more punishment and less access to veteran teachers than their white peers, according to surveys released Friday by the U.S. Education Department that include data from every U.S. school district.

What the study doesn't appear to do, is identify the root cause of this statistic, other tun attribute it to "racism". Did anybody collect data on the rate of misbehavior based on race? Did black students commit in-school offenses at a higher rate than white students?

And teachers? Really? They're going to try and peddle the line that it's racism because experienced, qualified teachers don't want to work at broke as schools with high discipline problems.

THIS is why we homeschool.
Posted by Constitutional Insurgent at 2:44 PM 3 comments

Man the Ramparts...let's take it to the House

From Militant Libertarian
Posted by Constitutional Insurgent at 6:03 PM 2 comments

On the 7th of March, I was honored to be invited as a guest on the BlogTalkRadio Show "The Gathering Storm", co-hosted by WC and AOW of Always On Watch. The topic was the 2nd Amendment, and we had a great time. Please check out their other episodes here.

So we went to the 2014 Manassas St. Patrick's Day Parade this past Saturday. Youngest daughter marched and danced with her Irish Dance School.

While much of the celebratory trimmings were fairly classy, there were many in attendance who made a caricature of both the holiday, and Irish culture. Nevermind that most seem to be oblivious and ignorant to the meaning of the day.

It's quite allowed to portray the Irish as drunkards....but heaven forbid we portray another ethnic or racial culture in a far more factual light.


Shown to me by my loving wife.....who wouldn't forget either.....
Posted by Constitutional Insurgent at 9:29 PM 0 comments

The most ironic spokesperson at CPAC 2014

I'm probably bestowing this title prematurely, as I don't believe Sarah Palin has spoken yet. So I anticipate redacting the title tomorrow.

Now, I would agree with Mrs Bachmann, that the Conservative ideology is, at it's core, far more intellectual [leaps and bounds actually] than anything coming from the left. But to have Michelle Bachmann deliver this speech, almost negates the message. Bachmann is a member of the pantheon of right wing bumper sticker machines.....who spout cliches and catch phrases when you put a quarter in her..

She is of the ilk that believe liberty is only available to Christians...and any counter to that pursuit is nothing short of Communism.

But, not being a Republican, the cadre of CPAC can obviously do as they see fit.
Posted by Constitutional Insurgent at 6:14 PM 6 comments

Yes, Virginia....Gun-Grabbers really ARE this stupid


I'd like to say that I'm surprise at how anyone taking such a public stand can be so monumentally ignorant of the item that they're opposing.

But....she is but the tip of the iceberg of asininity:

"The state should have a monopoly on legitimate violence" [Nadler, D-NY]

Violence Policy Centers' Josh Sugarmann in 1989: "Assault weapons... are a new topic. The weapons' menacing looks, coupled with the public's confusion over fully-automatic machine guns versus semi-automatic assault weapons - anything that looks like a machine gun is assumed to be a machine gun - can only increase the chance of public support for restrictions on these weapons."

In the PR handbook by OMB, Greenberg Quinlan Rosner, and KNP Communications, "Gun Control Handbook - Preventing Gun Violence Through Effective Messaging"....under the section titled "Overall Messaging Guidance," the guide states the Key Messaging Principle, is to always focus on emotional and value-driven arguments about gun violence, not the political food fight in Washington or wonky statistics. And it's critical that you ground your messaging around gun violence in prevention by making that emotional connection. And Tell stories with images and feelings. Our first task is to draw a vivid portrait and make an emotional connection. We should rely on emotionally powerful language, feelings and images to bring home the terrible impact of gun violence.

"I'm convinced that we have to have federal legislation to build on. We're going to have to take one step at a time, and the first step is necessarily - given the political realities - going to be very modest. Of course, it's true that politicians will then go home and say, 'This is a great law. The problem is solved.' And it's also true that such statements will tend to defuse the gun-control issue for a time. So then we'll have to strengthen that law, and then again to strengthen that law, and maybe again and again. Right now, though, we'd be satisfied not with half a loaf but with a slice. Our ultimate goal - total control of handguns in the United States - is going to take time. My estimate is from seven to ten years. The problem is to slow down the increasing number of handguns sold in this country. The second problem is to get them all registered. And the final problem is to make the possession of all handguns and all handgun ammunition - except for the military, policemen, licensed security guards, licensed sporting clubs, and licensed gun collectors - totally illegal." - Pete Shields, Chairman,Brady Campaign [when it was Handgun Control, Inc], 1976

Remember, they keep telling us that they don't want to take away anyone's firearms.......
Posted by Constitutional Insurgent at 3:51 PM 2 comments

The only CPAC Speech worth watching